This post was originally in YouMoz, and was promoted to the main blog because it provides great value and interest to our community. The author’s views are entirely his or her own and may not reflect the views of Moz, Inc.

What if you owned a paid directory site and every day you received emails upon emails stating that someone wants links removed. As they stacked up in your inbox, whether they were pleasant or they were sternly demanding you cease and desist, would you just want to give up?
What would you do to stop the barrage of emails if you thought the requests were just too overwhelming? How could you make it all go away, or at least the majority of it?

First, a bit of background

We had a new, important client come aboard on April 1, 2013 with a lot of work needed going forward. They had been losing rankings for some time and wanted help. With new clients, we want as much baseline data as possible so that we can measure progress going forward, so we do a lot of monitoring. On April 17th, one of our team members noticed something quite interesting. Using Ahrefs for link tracking, we saw there was a big spike in the number of external links coming to our new client’s site.

When the client came on board on two weeks prior, the site had about 5,500 links coming in and many of those were less than quality. Likely half or more were comment links from sites with no relevance to the client and they used the domain as the anchor text. Now, overnight they were at 6,100 links and the next day even more. Each day the links kept increasing. We saw they were coming from a paid directory called Netwerker.com. Within a month to six weeks, they were at over 30,000 new links from that site.

We sent a couple of emails asking that they please stop the linking, and we watched Google Webmaster Tools (GWT) every day like hawks waiting for the first link from Netwerker to show. The emails got no response, but in late May we saw the first links from there show up in GWT and we submitted a domain disavow immediately.

We launched their new site in late June and watched as they climbed in the rankings; that is a great feeling. Because the site was rising in the rankings rather well, we assumed the disavow tool had worked on Netwerker. Unfortunately, there was a cloud on the horizon concerning all of the link building that had been done for the client prior to our engagement. October arrived with a Penguin attack
(Penguin 2.1, Oct. 4, 2013) and they fell considerably in the SERPs. I mean, they disappeared for many of the best terms they had again began to rank for. They had fallen to page five or deeper for key terms. (NOTE: This was all algorithmic and they had no manual penalty.)

While telling the client that their new drop was a Penguin issue related to the October Penguin update (and the large ratio of really bad links), we also looked for anything else that would cause the issue or might be affecting the results. We are constantly monitoring and changing things with our clients. As a result, there are times we do not make a good change and we have to move things back. (We always tell the client if we have caused a negative impact on their rankings, etc. This is one of the most important things we ever do in building trust over time and we have never lost a client because we made a mistake.) We went through everything thoroughly and eliminated any other potential causative factors. At every turn there was a Penguin staring back at us!

When we had launched the new site in late June 2013, we had seen them rise back to page one for key terms in a competitive vertical. Now, they were missing for the majority of their most important terms. In mid-March of 2014, nearly a year after engagement, they agreed to do a severe link clean up and we began immediately. There would be roughly 45,000 – 50,000 links to clean up, but with 30,000 from the one domain already appropriately disavowed, it was a bit less daunting. I have to say here that I believe their reticence to do the link cleanup was due to really bad SEO in the past. They had, over time, had several SEO people/firms and at every turn, they were given poor advice. I believe they were misinformed into believing that high rankings were easy to get and there were “tricks” that would fool Google so you could pull it off. So, it really isn’t a client’s fault when they believe things are easy in the world of SEO.

Finally, it begins to be fun

About two weeks in, we saw them start to pop up randomly in the rankings. We were regularly getting responses back from linking sites. Some responses were positive and some were requests for money to remove the links; the majority gave us the famous “no reply.” But, we were making progress and beginning to see a result. Around the first or second week of April their most precious term, geo location + product/service, was ranked number one and their rich snippets were beautiful. It came and went over the next week or two, staying longer each time.

To track links we use MajesticSEO, Ahrefs, Open Site Explorer, and Google Webmaster Tools. As the project progressed, our Director of Content and Media who was overseeing the project could not understand why so many links were falling off so quickly. Frankly, we were not getting that many agreeing to remove them.

Here is a screenshot of the lost links from Ahrefs.

Here are the lost links in MajesticSEO.

We were seeing links fall off as if the wording we had used in our emails to the sites was magical. This caused a bit of skepticism on our team’s part so they began to dig deeper. It took little time to realize the majority of the links that were falling off were from Netwerker! (Remember, a disavow does not keep the links from showing in the link research tools.) Were they suddenly good guys and willing to clear it all up? Had our changed wording caused a change of heart? No, the links from Netwerker still showed in GWT; Webmaster Tools had never shown all from Netwerker, only about 13,000, and it was still showing 13,000. But, was that just because Google was slower at showing the change? To check we did a couple of things. First, we just tried out the links that were “lost” and we saw they still resolved to the site, so we dug some more.

Using a bit of magic in the form of a
User-Agent Switcher extension and eSolutions, What’s my info? (to verify the correct user-agent was being presented), our head of development ran the user-agent string for Ahrefs and MajesticSEO. What he found was that Netwerker was now starting to block MajesticSEO and Ahrefs via a 406 response. We were unable to check Removeem, but the site was not yet blocking OSE. Here are some screenshots to show the results we are seeing. Notice in the first screenshot, all is well with Googlebot. 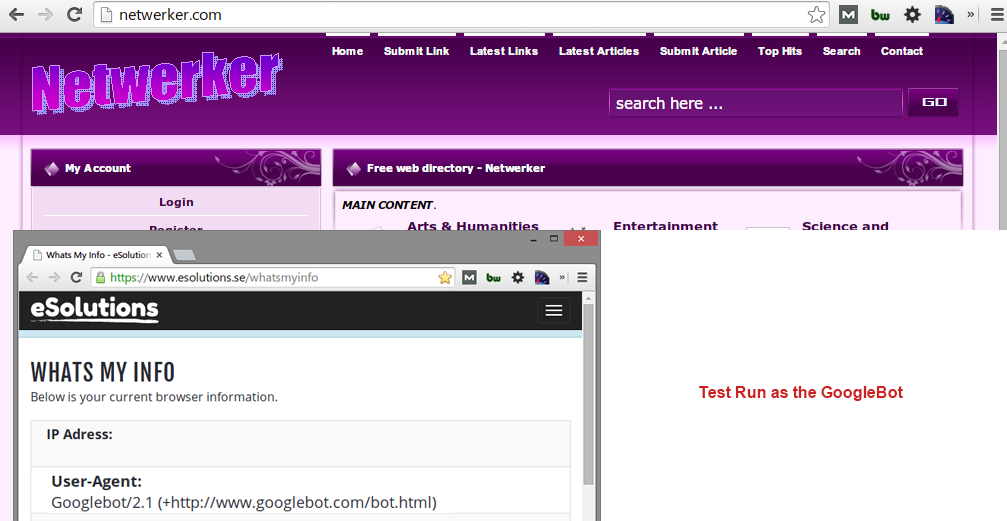 But A Different Story for Ahrefs

And a Different Story for MajesticSEO 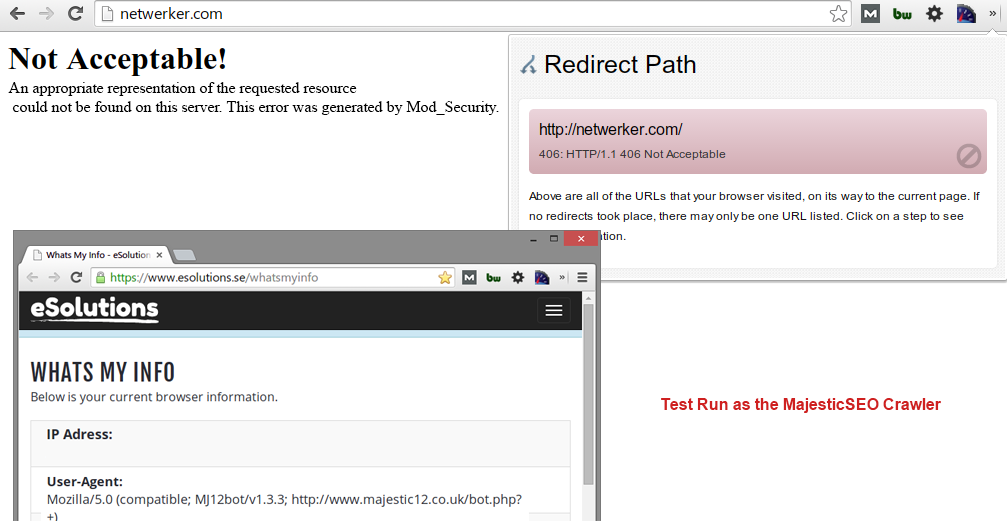 We alerted both Ahrefs and MajesticSEO and neither responded beyond we will look into it canned response. We thought it important to let those dealing with link removal know to look even more carefully. Now August and three months in, both maintain the original response.

User-agents and how to run these tests

The user-agent or user-agent string is sent to the server along with any request. This allows the server to determine the best response to deliver based on conditions set up by its developers. It appears in the case of Netwerker’s servers that the response is to deny access to certain user-agents.

If you talk with anyone who is known for link removal (think people like Ryan Kent of Vitopian, an expert in Link cleanup), they will tell you to use every link report you can get your hands on to ensure you miss nothing. They always include Google Webmaster Tools as an important tool. Personally, while we always use GWT, early on I did not think GWT was important for other than checking to see if we missed anything due to them consistently showing less links than others and all of the links showing in GWT are usually showing in the other tools. My opinion has changed with this revelation.

Given we gather data on clients early on, we had something to refer back to with the link clean-up; today if someone comes in and we have no history of their links, we must assume they will have links from sites blocking major link discovery tools and we have a heightened sense of caution. We will not believe we have cleaned everything ever again; we can believe we cleaned everything in GWT.

If various directories and other sites with a lot of outbound links start blocking link discovery tools because they, “just don’t want to hear any more removal requests,” GWT just became your most important tool for catching the ones that block the tools. They would not want to block Google or Bing for the obvious reasons.

So, as you go forward and you look at links with your own site and/or with clients, I suggest that you go to GWT to make sure there is not something showing there which fails to show in the well-known link discovery tools.